The Myers-Briggs Type Indicator, or MBTI, is one of the most popular personality tests around. The test classifies people as one of 16 personality types, broken down along four axes: extroverted/introverted, sensing/intuition, thinking/feeling and judging/perceiving. (See the16 MBTI personality types in the nearby image from the Myers & Briggs Foundation.) 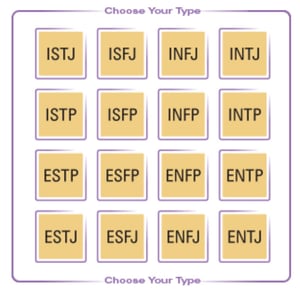 Roughly 2 million people take it every year, and chances are you're one of them, either due to your own curiosity or as part of an assessment given by an employer or school, and if you're a manager, you may have used it as a planning or diagnostic tool.

But a growing number of experts are questioning the value of Myers-Briggs, or at least urging people to take its results with a very large grain of salt. Let’s take a look at some of the questions that have been raised about the test, and the reasons it may not be a panacea when it comes to assessing staff.

“The purpose of the Myers-Briggs Type Indicator® (MBTI®) personality inventory is to make the theory of psychological types described by C. G. Jung understandable and useful in people's lives. The essence of the theory is that much seemingly random variation in the behavior is actually quite orderly and consistent, being due to basic differences in the ways individuals prefer to use their perception and judgment.”

In "Personality Plus," a colorful 2004 New Yorker article on personality testing, Malcolm Gladwell describes the curious origins of the MBTI. The test wasn't developed by professional psychologists, but by Katherine Briggs, a housewife who was keenly interested in figuring out Clarence Myers, who had just married her daughter Isabel and whose personality was quite different from the Briggs family's. It was the 1920s, and Briggs had just read Carl Jung's newly translated Personality Types. She decided that his theory of types was key to understanding human behavior, and Katherine and Isobel developed and marketed the test together.

Today, as The Economist notes, Jung's theories have fallen into discredit in academic circles, as there hasn't been much substantive research done to confirm them. Moreover, the very quantitative results that make Myers-Briggs popular fall short when scrutinized by modern analysts. David J. Pittenger, Chair of the Department of Psychology at Marietta College, outlines a couple measures by which it comes up short:

Another problem is that measurement along each axis is only scored two ways. You are, for instance, either an introvert or extrovert in the Myers-Briggs world, with nothing in between. But actual scores don't show a binomial distribution — in other words, most results don't cluster at one end of the scale or the other, but rather fall along a bell curve that the test then cuts arbitrarily in half. Even some of the test's defenders say that results should be presented on a continuous scale rather than as discreet types.

Figure 2. Author, speaker and Wharton professor Adam Grant has his own opinion on MBTI.

The test that persists

So why is the Myers-Briggs test still so popular? Well, for one thing, it's profitable: CPP, the company that owns the copyright to the test, makes money training consultants and coaches, who in turn have an interest in promoting its use. It's become omnipresent in the world of big-money consulting firms: the test is very popular at McKinsey, for instance.

And it also provides answers for managers about staff that give opportunities for categorization and action without being insulting to the test takers, as none of the types are presented as being negative. As Vox.com puts it, "This isn't a test designed to accurately categorize people, but rather a test designed to make them feel happy after taking it."

An alternative: The Big Five

This wouldn't be such a big deal if the test didn't have real-world consequences. But as Shankar Vedantam explains on NPR's Hidden Brain program, results are used as the basis of hiring and firing decisions, and you can find anecdotal evidence of this on social media as well.

MORE: Read "I Took the Big Five Personality Test. The Answers Weren't Surprising — But Were Helpful."

If you're looking for a test that has more backing from modern-day psychologists, you might want to check out The Big Five, which has a lot of research behind it — it has, for instance, been shown to be statistically reliable, with individuals scoring similarly across multiple test-taking sessions. It also has the benefit of being free.

But as Gladwell explains, any test is inherently limited. To a manager, the test's purpose is to be able to predict, as closely as possible, how someone will behave in a certain situation. And perhaps the only way to really know is to throw them in to see them sink or swim.

How to Use Delegative Leadership To Empower Team Success