In the Zone: Scheduling Global Meetings

Your team is distributed across several state and national borders. That means your reporting, your creative assets, and your support mechanisms are produced in several time zones. But today’s scheduling software makes setting up meetings in several time zones a real headache. Things only get worse when you’re the one on the move or if someone’s observing daylight-saving time.

How many times have you had to do math in your head to figure out whether you’ll be awake in Penang to do a call with your office in San Francisco?

Here are some tricks to getting it right:

Yes, it’s a flat earth, but one location should dominate in terms of choosing your time. For much of the world, it’s Greenwich, UK. For you, it should be the time zone of your headquarters. This eliminates the confusion of always having to clarify whether you’re talking about lunchtime in New York or Delhi. At Prialto, our assistants are taught to always express time in terms of where their member’s home office is based.

The apps built into your computer and smartphone don’t have a good process for scheduling meetings across time zones. World time clocks and Google Calendar’s geo-location settings only tell you the current time instead of future available slots. Since no calendar software does the converting and scheduling in one place, we are forced to go with third party apps.

When working from a computer, we’ve become fans of World Time Buddy. It has a simple slider mechanism that allows you to see all potential future times in a single glance. It sends calendar invitations directly through the interface, and also allows you to create a profile and specify member cities, so it will remember your favorite places.

Most other online apps overcomplicate the process with complex interfaces and graphs. Tools like Sametimeas look simplistic, but require you to click back and restart the process if you’re trying to look up multiple times. Converters like those on Timeanddate let you look at several cities at once, but not more than one time at once. Other apps like Everytimezone.com have a similar slider interface, but restrict the cities you can name to look up. World Time Buddy is both user-friendly and comprehensive. 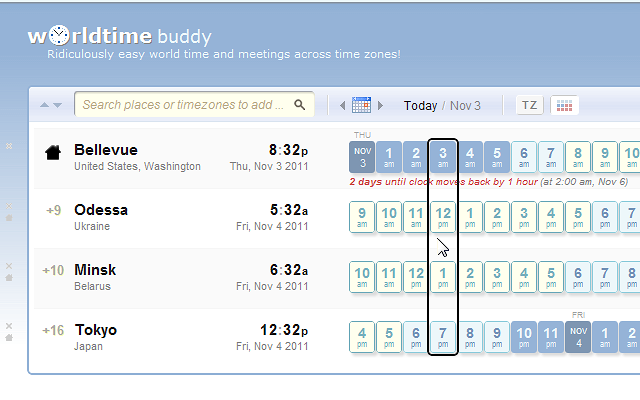 (Note that World Time Buddy has a partly paid model, but will allow viewing of a limited number of cities for free.)

Choose the best mobile app, too.

But World Time Buddy lacks mobile and desktop applications. So, on the road, you’ve got to find an alternative. Thus far, Timepal by TapMafia is our recommended app for the smartphone space. The good news is that it integrates with your phone’s calendar and email functions, so that you can send out a meeting invite directly from its interface. The bad news? The free version is limited and the paid version is affordable, but a bit buggy. Both versions restrict your meetings to half or full-hourly blocks.

Still, Timepal is far more user-friendly than alternatives like All Hours Time Zone Meeting, which is restricted to just three simultaneous time zones, or Time Zone Lite, whose interface looks like a colorful Excel spreadsheet.

Stick to your process.

You always have to set up your own processes to make your tools effective. Commit to a time zone management system that works for you. Eric Taussig, for example, currently coordinates meetings with Prialto’s Bay Area Headquarters, conducts sales calls with New York and California, interfaces with Prialto’s team of assistants in Guatemala, and searches for commercial space in Manila – all while living in Thailand. Eric’s hack: He only schedules with his PC and iPhone in front him at the same time. The geo-location capabilities of the iPhone make it express his schedule in local time, no matter where his is; while his PC always keeps times in PST.

Ideally, these applications and processes would be integrated right into our calendar software. But until our core systems are built around the realities of our highly distributed teams, you’ll need to piece together third-party apps and some best practices to avoid calculating GMT + DST – 14 on your fingers ever again.